Here is a complete list of videos that Barry from Sim Racing Studio made reviewing PT-Actuator.

So I just wanted to drop in here and share my fix for EMI and ground loops on my SFX-100+Surge that was causing grey outs when touching my Pimax headset, and also causing my HE Sprints to completely disconnect:

STEP1: get everything you are powering that’s interconnected in a system (sfx drivers, pc, usb hub, etc.) on one outlet. I accomplished this buy putting everything on a 12 outlet power strip that goes back to ONE outlet. Once that’s done, all of your peripherals and drivers are sharing one ground (assuming the outlet you’re using is grounded.... make sure it is) which will reduce the chances of creating ground loops...

STEP2: Make sure you’re using shielded cable or shielded tape on your servo to driver power lines (data line doesn’t need shielding). Mine came shielded, but If yours didn’t, the Thanos AMC  user manual has a detailed procedure for doing it.

STEP3: Buy yourself the in-line emi filter suggested by Thanos in his guide. Below is the link. It’s a very easy device to install (will explain next), and it will essentially eliminate a lot of the higher frequency noise that causes drop outs on yours system. 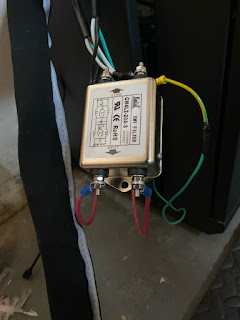 Installing the filter.... Basically, all you have to do is instal this device on your main power cable that feeds your drivers...My drivers power cables are all daisy chained, so all I did was disconnect the wires (green,white and black) from ONLY the FIRST driver in the series, and connect them to the LINE SIDE of the filter (see pictures). The top two prongs on the LINE side are for power and neutral (black and white for me in the US). They are bidirectional so it does NOT matter which one is black and which one is white, just stay consistent when you eventually wire in the LOAD side back to the driver. The bottom prong on the LINE side is a ground for your green wire. So far all you’ve done is remove the 3 wires from your first driver, and wired them to the LINE side of the filter... 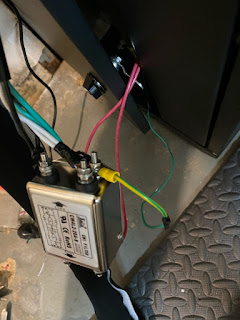 NEXT, you want to get two pieces of wire to connect the LOAD side of the filter back to the driver where you removed the black and white wires before... I opted not to use color coded (black and white wires) as I had some red 12-gauge sitting there, so don’t panic and get confused. As long as the wire is as thick as the other power wires, it’s not a problem.... throw some spade connectors on them, and wire them into the LOAD side prongs of the filter.

So now you’ve wired in two wires to the LOAD side of the filter, and you’re ready to connect them back to the driver... 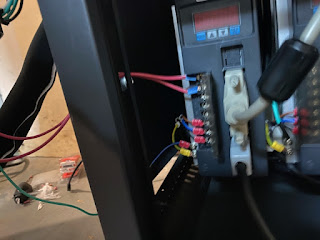 Make sure to take note of which of the two top prongs on the LINE side you made black, and which one you made white.... why? Because your about to connect the LOAD side back to the driver, and as we know, the driver has a specific spot for a black (power) wire and one for a white (neutral) wire... you can’t mix this up when connecting the load side to the driver.... So please take a look at my pictures. I made sure to connect the wire on the LOAD side that corresponds with the black wire on my LINE SIDE to the first attachment point on your driver....The second wire on the LOAD side corresponding with the white wire on the LINE side then goes to the spot right below the black wire on your driver. just like it was before you removed them. LASTLY, connect the GROUND on the LINE SIDE to the driver housing. That’s it!  So you’re done.... super simple....All you did was introduce a filter before your first driver. Now all your drivers and everything else on that power strip will have much less EMI.

STEP4: ground your rig properly.... sand down the anodized finished or drill a fresh hole into your rig (anodized aluminum is a poor conductor), and attach a wire (I have multiple wires because of multiple layers in my rig with surge). Once that’s done, take the other end of that wire(s) and attach it/them to the green ground wire off a male 3-prong power plug you’ve just cut off from a power cable ... obviously you don’t want power (black and white), as your intention is to make a ground plug for your rig, so you’ll either need to cut the white/black out and tape the ends off with electrical tape, or just remove the prongs associated with those two wires from the plug entirely, and just leave the green wire/ground on the plug. Congratulations, you’ve just made yourself a ground plug you can literally plug into THE SAME POWER STRIP as all you’re other stuff, and ground your rig. Your rig is now grounded using the common ground from your outlet that all your other stuff is using. Do not ground your rig on the drivers! It’s a noisy ground and it’s not as good as the aforementioned method. 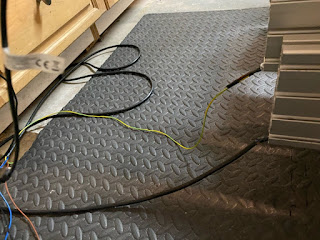 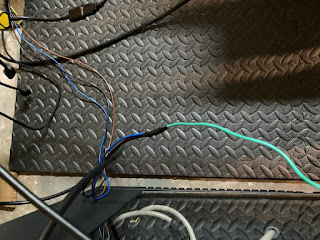 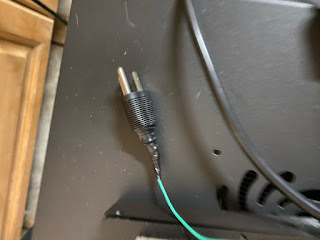 You’re all done! Enjoy your rig without dropouts and grey outs...

Confused a bit? Take a look on this video to see a bit more clear the wiring:

Posted by Thanos TronicGr at 9:53 AM No comments:

Posted by Thanos TronicGr at 7:43 AM No comments:

Huge thanks to Chris for the shout out!! Check his build details here:Peacemakers 6dof Unicorn Build


Thanks
Thanos
Posted by Thanos TronicGr at 4:23 AM No comments:

Hey guys, I'm not sure anyone takes it seriously, but the covid-19 is airborne, and unless everyone stays home in isolation for 15 days atleast, there is going to be millions getting infected if not already in the United States... I still see people out and about walking, jogging, taking their whole families for a stroll in the streets, despite the Shelter in Place mandate here in California by the Governor. Its going to get real ugly here... therefore I'll be unable to ship out any orders, and placed for now my Tindie store in vacation mode for a while. I hope you all understand this is serious. I'll be here to answer questions or further develop on firmware etc. Take care people!
Posted by Thanos TronicGr at 9:16 PM No comments:


If you have one of these SFX100 4DOF platforms but no way to connect them to Simtools or FlyPT mover motion software, here is solution I designed for a DIY 4DOF controller that matches the 100mm actuators hardware. Its free and its plug and play (once put together).


I only provide plans (gerber files) and firmware for the device, and no support. Don't ask me about it, I don't build it or sell it. You will have to collect the parts for it. Its totally DIY. This free controller has some limitations but still its plug and play, no need to setup anything, all settings are in the firmware. The only extra parameters needed in the AASD-15A drives are the following:
Pn24 = 100
Pn52 = 1
Pn60 = 2
Pn61 = 6

There is no restriction to use it or copy it or modify it to your needs. Feel free to improvise! Heck, you could probably use two of them, and use the second for Traction loss, or active seat belt , or a g-seat... A small modification of the electronic gear would allow such use if you need less turns of the motor etc. Simtools and FlyPT support multiple interfaces! 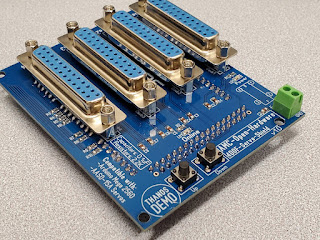 In contrast the AMC-AASD15A servo controller has:

Posted by Thanos TronicGr at 11:50 AM No comments:


Here is a quick presentation of a 6DOF platform that can be used for race of flight simulation. You can always use your own recessed frame instead of the one provided but the thing about the existing frame is that is very light and modular for easy shipping in a crate. These new actuators offer huge motion range and speed (800mm/s) and combined with these heavy duty universal joint can support even a full size Cessna cockpit.


The metal structure comes in pieces that you can assemble together for easy shipping via smaller size crate.


Thanos
San Diego, California
USA, 2019
Posted by Thanos TronicGr at 7:02 AM No comments: 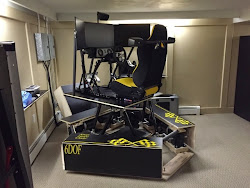