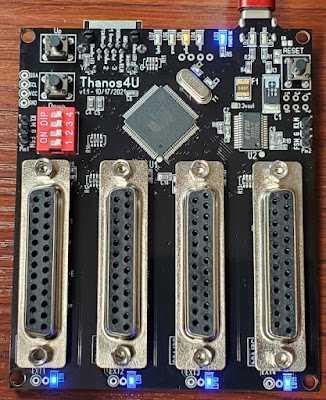 The new Thanos4U motion controller was designed to easy plug and play connection of the many DIY rigs out there that use SFX-100 or similar actuators. To allow then use the plug and play motion software SimRacingStudio. Essentially you can build the actuators according to the plans for standard SFX-100 and don't use the suggested leonardo, rather use the Thanos4U that is plug and play with the AASD-15A servos used on these actuators. Or use any similar actuators that also have AASD-15A servos (eRacing Lab, Scuderiart, PT-actuator etc). 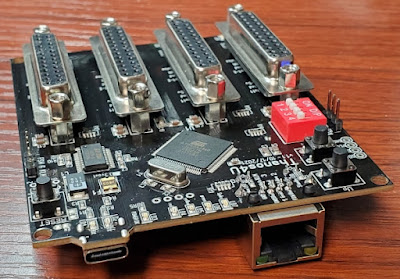 The Thanos4U controller features four DB25 ports so you can use standard DB25 cables (straight through 25C one to one). The DB25 ports are hot plug, meaning you can plug or power on the actuators at any time, the controller will recognize the active servo being connected and if ready will calibrate its home position and will move to the park position (usually 1% of the total stroke, retracted). This is especially useful for vertical actuator rigs as the park position will be totally down so you can power off the servos without fear it might drop from gravity.

The 4 vertical actuators usually are representing 3DOF, aka pitch, roll and heave. But the motion software can also mix in the pitch roll accelerations for surge or lateral very convincingly. The SimRacingStudio, not only handles the motion but also autodetects the presence of the Thanos4U controller being connected and automatically activates and set it up (Spike filter level protection). Apart from the motion, SRS App can fully configure the Thanos4U controller to allow setup of the actuator stroke values, the leadscrew size, inline or foldback arrangement, for each actuator individually. And gives access to alter other parameters like park and standby timeouts, speeds etc. All is done remotely so you don't have to reach for the controller to adjust things like with the AMC-AASD15A controller that has an LCD menu for that. 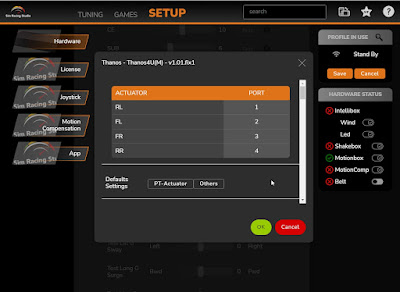 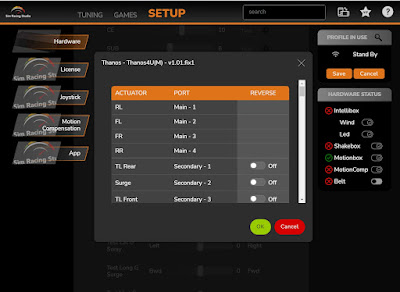 Here's a quick comparison table about the differences between the AMC-AASD15A controller and the Thanos4U controller: 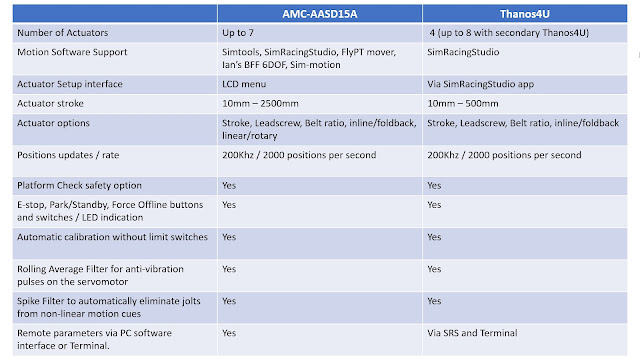 Main differences are the plug and play supported software, ways to access the parameters, and number of actuators supported by each. But there are hidden differences in the internal engine of the Thanos4U, with highly optimized code for fixed timing of the pulses interleaved across all 4 motors, that results in much smoother and fluid operation.

A customer that had tried both AMC-AASD15A and Thanos4U controllers mentioned the noticeable improvement on Discord: 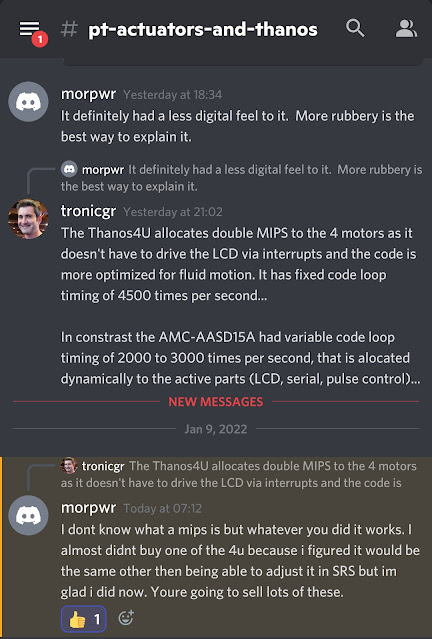 The Thanos4U also features the same RJ45 port used for e-stop button box, which can be either built by the end user according to the diagram, or bought ready assembled from Bajer on Tindie or PT-Actuator. 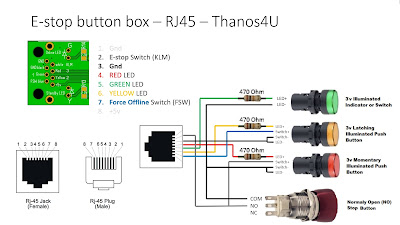 A copy of the secure firmware along with the user manual of the Thanos4U controller can be found here. That said, the firmware is fully developed and already 100% integrated with SRS but is possible to be updated in the future to add extra features as needed.

Posted by Thanos TronicGr at 9:43 AM No comments: